This is an interesting NYT article about buying habits, market research and advertising. It describes how Target has been able to compile and analyze customer data in order to identify women who are likely pregnant as early as possible. One of the reasons pregnant women are such an attractive market segment, the article states, is … Read More 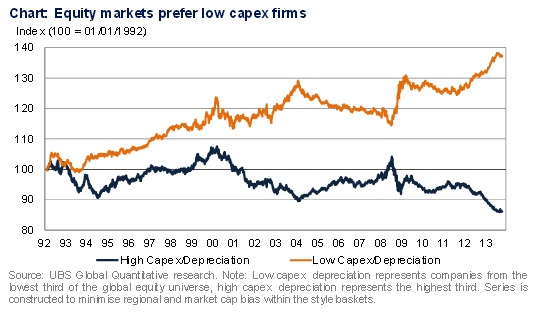 Mainstream economic theory suggests that returns are generated by real investment: the larger the investment, the larger the return (eventually). The logic should be that firms that have high capex spending will outperform and those that spend too little should not be able to survive and compete.

What is suggested by the data is exactly the opposite: companies that don’t spend on capex actually seem to have been rewarded by the market over this 20 year period. A possible cause is that forms of strategic sabotage are more important to the capitalization of investments – i.e., cartels, regulations, monopolies.

Welcome to a weekly investigation into the fascinating world of corporate sabotage where human creativity, cooperation, mutual aid and well-being are all held ransom for the profit and power of dominant owners. Every week this column will explore various aspects of what Veblen called ‘strategic sabotage’.  But first, a bit of context. It appears that … Read More